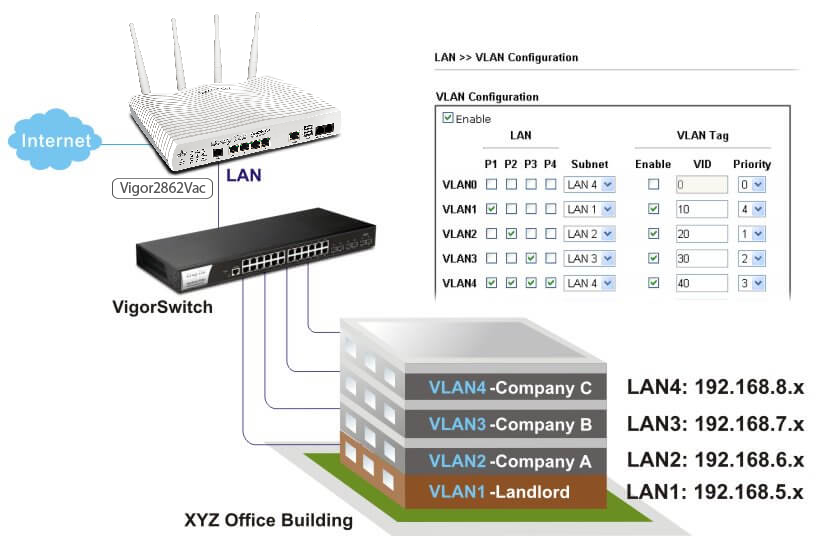 The Vigor2862 supports up to 8 LAN IP subnets, an IP Routed subnet and a DMZ port. The 8 LAN IP subnets can be assigned to 16 VLANS allowing the creation of logical workgroups to provide additional security and traffic management within an organisation. For example, within a building each tenant or workgroup can be assigned their own IP network. In addition, workgroups can also be located in different physical locations or floors within a building. For example, a Sales Department may be located on the 1st floor of a building, but some of the sales people are located on the second floor and still be part of the sales VLAN. The IEEE 802.1q VLAN trunk feature means that only a single LAN cable connection is required between the router and the VigorSwitch, create a number of VLANs for different departments.

The VLAN Tag Priority setting can be used to prioritise traffic for certain VLANS or workgroups.

Increase remote access security to your office by combining both VPN and Firewall features in the Vigor2862.

The Vigor2862 supports up to 32 simultaneous VPN tunnels (such as IPSec/PPTP/L2TP/SSL protocols) for secure data exchange and communication. In addition, 16 SSL-VPN tunnels are available for teleworkers to access the office LAN. Teleworkers can be authenticated directly with your LDAP server if preferred. The SSL technology is same as the encryption used for secure web sites such as online banking.

Security is enhanced by utilising firewall features such as web content and URL filtering in addition to restricting access to P2P traffic and Instant Messaging applications.

The Vigor2862 series is equipped with ADSL2+/VDSL2 and one Gigabit Ethernet port and two USB WAN ports for WAN load-balancing and backup. This allows backup VPN tunnels to be created to branch office networks to ensure maximum VPN connectivity uptime. In addition, the VPN Trunking feature can be used to set up dual VPN tunnel links to branch office networks to increase bandwidth and provide redundancy and backup to prevent downtime due to one of the WAN connections failing.

The Central Management features allow the network administrator to monitor and configure Vigor devices including VigorAPs, Vigor Switches, and even Vigor Routers from a central management console built into the Vigor2862 series router. Maintenance tasks such as firmware upgrades, configuration backup and restoration as well as and monitoring be done from a single portal.

Three options are available in Central Management. These are:

VPN management supports 8 external CPE devices and allows the creation and management of IPSec, PPTP or SSL-VPN tunnels from the central Vigor2862 router to the remote routers.

The AP Management feature allows the monitoring and auto-configuration of up to 20 DrayTek Access Points connected to the Vigor2862 LAN. Automatic Provisioning can be triggered when a new Access point is connected to the LAN. Other features include client or traffic history of the AP and configuration of load balancing rules for the Access Points.

Switch Management allows you to manage up to 10 Vigor Switches. It simplifies the task of configuring VLANS in attached VigorSwitches matching the router’s VLAN settings. It also displays the switch status as well as the network topology through the switch hierarchy feature. 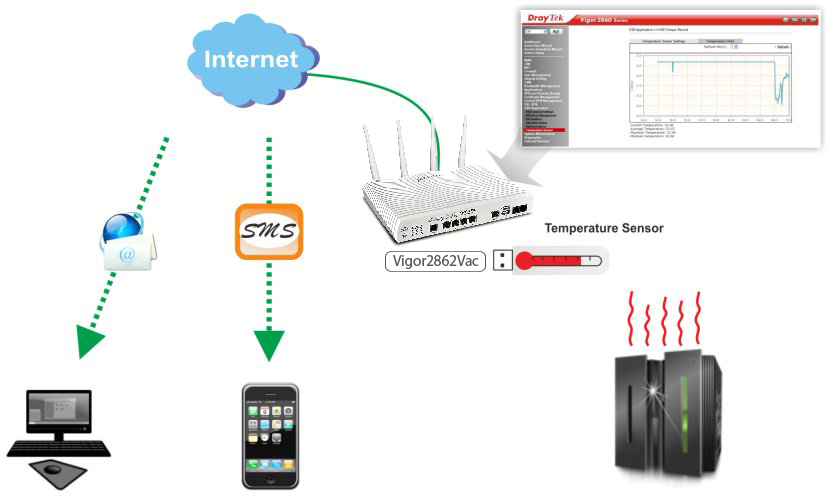 The optional USB thermometer can be attached to the Vigor2862 to provide logging of the ambient temperature in the server room. Upper and lower temperature thresholds can be set and when the temperature exceeds these thresholds and alarm is generated. This alarm can be sent to the network administrator via email or SMS to alert them of the environmental issue.

Vigor2862ac routers now operate 802.11ac Wave 2 Wi-Fi with support for MU-MIMO, TX Beam Forming, 1733Mb/s Link Rate and up to 4 spatial streams. This allows up to 4 wireless clients such as laptops or smartphones to have simultaneous access to a Wi-Fi channel. The result is an increased performance of the Wi-Fi network.

For more Information and to know our Best recommendations Contact Us today!